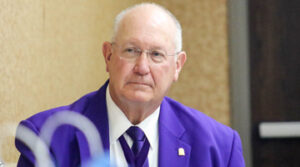 The South Central Region consists of the Grand Councils of Arkansas, Kansas, Louisana, Missouri, Oklahoma, and Texas, with Texas, the only non-member of the General Grand Council.

The 2021 South Central Conference will be held in Overland Park, Kansas, on September 17th.

I want to express my sincere appreciation for R. E. Dick Browning, South Central Regional Deputy Grand High Priest for the General Grand Chapter, and Sir Knight Jack M. Harper II, South Central Department Commander for the Grand Encampment, for their cooperation, support, and friendship. The opportunity of working with these noteworthy leaders of the fraternity during this Triennial was indeed a pleasure.

It has been an honor to serve our General Grand Council, and I offer my sincere thanks to General Grand Master Glover for his confidence in me and the opportunity to serve during his Triennial.